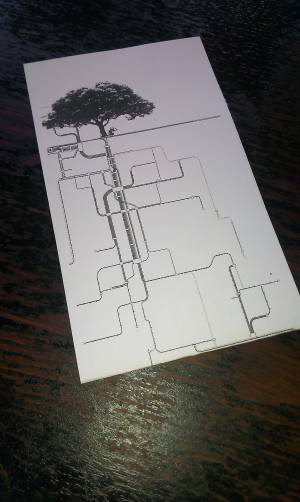 The rhizome is a concept of thought, knowledge, presentation, society etc. that offers itself as an alternative to classical hierarchical structures such as trees. The word comes from botany where it describes a subterranean root structure of plants that spreads outs, interconnects, and also grows new plants from its basis. In philosophy it was introduced by Gilles Deleuze and Félix Guattari, described for example in the first chapter of the fascinating book “ 1000 Plateaus” that is itself strucured nonlinearily as a kind of rhizome.

We held this session back in our Leipzig headquarter in Mariannenstraße on Saturday afternoon where Tobias Fritz joined us and started with a presentation by Markus. First a quote from Kafka, from his diaries 1910-1923:

Some motivations to operate with rhizomatic structures:

This could also be a scheme for the organization inside the BRCP. There is no organizational centre of people that are responsible for activities but knots of activity arise more or less spontaneously (like now in Leipzig) from the interconnected web of members, i.e. temporal and local accumulations of creative activity that then dissolves and later and elsewhere forms new clusters while retaining some of the old connections.

Leo mentiones a game proposed by him, Johannes, and Ryszard where you name two arbitrary topics or objects (e.g. from maths) as vertices and then you try to come up with a connection, like: Lipschitz-continuity and donkeys. Well…

Tobias asks what the new model would be good for; Markus: be more productive, or productive in another way, more joyful, include more and different people, think more freely and creative

A gedankenspiel about rhizomatic teaching (Florian)
Suppose one would enter a seminar, a workshop or even just start at university and there would be only offers of different courses without any starting point like a very rhizomatic structure. What would be the challenge for the teacher and the class?